Disclaimer: I received a CTM Band to review as part of being a BibRave Pro. Learn more about becoming a BibRave Pro (ambassador), and check out BibRave.com to review, find and write race reviews!

No matter what sport you play, during a training cycle your body needs to recover properly. Recovery helps prevent injury and heal sore muscles. Recovery tools and methods abound – from foam rollers to frozen tennis balls and lacrosse balls to compression and old-fashioned ice or heat.

As innovation brings new products to the market, the creator of the CTM Band – Dr. Kyle Bowling –combined three methods to aid recovery. Through extensive research, the practicing sports chiropractor and former NCAA Division I athlete, found what muscles and joints need to recovery. With the CTM Band, Bowling combined compression, tension, and movement – the three things that studies show are needed to create an effective myofascial release.

With the CTM Band, you have the ability to more effectively incorporate a myofascial release into your work out and recovery routines. Through the cool and innovative design, the CTM Band relieves muscle spasms, releases knots, speeds muscle recovery, breaks up scar tissue, increases range of motion, and activates muscles.

I have been testing out the CTM Band for the past month. I have used a foam roller in the past, though not all the time. I’ve also used a lot of ice and elevation. Out of the bag, the biggest benefit of CTM Band – I found – is that it is portable. Yes, foam rollers are portable, but you need a flat surface to use. With CTM Band you put the pressure balls in place and wrap with the 6-foot band. You then move your extremity or stretch. 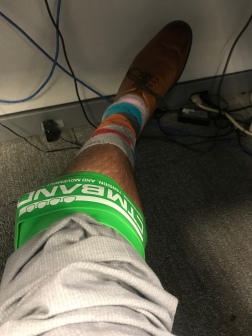 I used the CTM Band on my calf several times as it was acting up one of the weeks of the trial. While my calf was wrapped I wrote the ABCs with my toes and I was able to work the soreness and knots out. I also used the CTM Band on my quad and IT area. Because of the portability, I took the CTM Band to work and even used it while sitting in rush hour traffic. This helped me not only recover from runs, but prepare for runs as well. I felt a significant difference and it showed through my training.

Another great feature is the CTM Band comes with four half golf balls on the end. But it is easily adjustable by removing the balls. This makes it easier to focus on areas such as the foot and Achilles. Because of the dynamic design, portability, and research put into the CTM Band, you no longer need to use a combination of stretching, foam rollers, triggerpoint balls, and flossbands to achieve relief from soreness and speed muscle recovery.

The CTM Band has definitely been added as one of my top training tools. You can add it too and save 20% ($8) when you order and use the code CTMBIBRAVE.